The Rules As Written for Lords of Gossamer and Shadow are clear, the Attribute Auction establishes the ranks of skill for all the Players, and then the GM can create his NPC cast based on that ladder of ranks.

Oh, but what happens if someone joins the game in two months? You have to squeeze them into the ladder of ranks. That’s a bit awkward.

And what if you have been playing for 18 months and the NPC cast is now over a hundred people? How many NPCs of 2.5 rank or 1.5 rank or secret new 1 rank is the GM going to track? And how many dead ties between Attributes have you now created?

And what happens if you go to a gaming convention and the GM starts everyone with a pile of points because auctions take too long? Well, you can build the ladder after everyone does their point builds in secret. Also a bit awkward and it doesn’t add much to in-world play.

Bid numbers versus ranks is a long-standing GM style discussion for running diceless games. (Long standing as in going back to the earliest internet mailing lists.)

It’s complicated by those folks who want to know how much a fight staged with 2nd and 3rd rank PCs ganging up on 1st rank Strength PC, for example.

1st rank is still going to win, but how close is it?

Some long time ago, I had a web reference page for something I called ‘story values’, which is basically narrative ranks, or scale of Attributes for the campaign. The Rules As Written include an overall real-world relationship for Mortal, Superior, and Paragon ranks. And that’s where I start for scaling what’s not said in the rules (ie, much higher ranks.)

Why scale up practical in-game effects when the rules already tell you who is going to win? Does it matter exactly how strong someone’s Attribute is if it is clear they are the winner? I think it does matter for immersion and the practical side of letting a PC plan their actions out. The best diceless play is when system disappears for the Players (IMHO). Practical, easy to remember scale of Attributes helps this immensely.

So here’s a chart captured from the Wayback Machine, a scale of narrative ranks as they stand in my Amber Diceless games: 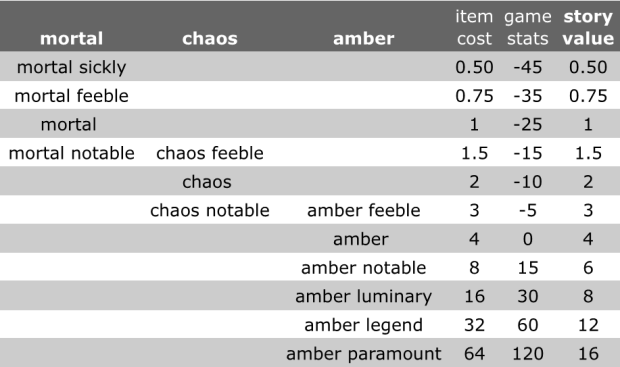 The 3 columns to the right include the scales of artifacts/items, Attribute numbers, and ‘story value’ or a real-world feat scale. Mortal (average healthy) equals practical 1 rank scale.

Application is, a Player who decided to not spend points on Strength, has Amber rank, which is 4 times better than Mortal. Meaning that Strength moves 4 times more stuff than what you’d expect a human to move. Easily then, this PC knows he can toss humans out of his way, but is not stronger than 5 mortals working together.

Then the rest follows, based on what trial and error I did those years ago: Prince Gerard (depending on how the points were handed out by the GM) could easily toss young Amber royals out of his way, being 16 times stronger than Mortal and 4 times stronger than PCs who bid no points in Strength.

The chart was a big success for me, because it made Attribute contests flow very quickly. It also allowed Players to ‘feel’ for their capabilities before the game ever started. It also could help during an auction bid process, but that was not its purpose in design.

The chart begins to address lots of conflict issues. Two PCs with heavy investment in Strength, let’s say 25 points, are nearly as strong as Gerard when teaming against him. Do they have his skill? No.

I brought this info out of the dusty nowheres of history as a bookmark to discussion and future commentary.

Talk to your GM in session zero before the game starts about the baseline of such rules in play.

This site uses Akismet to reduce spam. Learn how your comment data is processed.